Tina Barahanos is a multidisciplinary artist, whose work is centred in painting, printmaking, photography and digital media. Her work draws influence from the iconography of the everyday depicting ordinary, unassuming scenes that are likely to go unnoticed. It is within these fleeting observations she finds imagery that can strengthen the connection between art and the everyday. 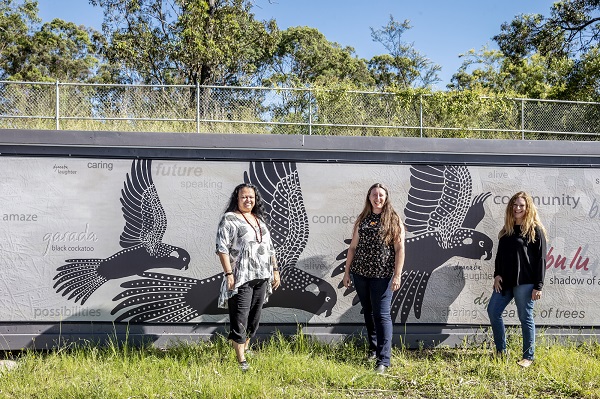 Tina has exhibited in solo exhibitions with the Robin Gibson Gallery. Tina is also a custom printmaker and has been a member of the Sydney Printmakers since 2010. Her work is held in public and private collections nationally and internationally.

Alexandra Byrne is a practicing artist based between the Mid-North Coast of NSW and Western Sydney. Her interdisciplinary approach to studio practice has concentrated predominantly on drawing and sculpture but also includes installation, painting, photography and print.

Alexandra’s work searches for ways to articulate experiential and often ineffable aspects of phenomena in the relationship between the natural and human world. Alexandra has combined her intimate knowledge of artmaking with over 20 years’ experience working in technical roles within arts education and community arts organisations.

Alexandra has also been the recipient of the following prestigious awards: winner of the Local Artist Award (Blacktown City Art Prize 2015), joint winner of the Open Sculpture Prize (AquaSculpture 2007), the Basil and Muriel Hooper Scholarship (2007-8), the Tom Nelson (Maritime Union of Australia) Artist Subsidy - Sculpture by the Sea, Bondi (2008) and the A&E Metal Prize for Sculpture - COFA (2008). Her work has been exhibited both nationally and internationally and is held in public and private collections in Australia, Bulgaria, Hong Kong, the Netherlands and the USA.

Leanne Watson is a Darug/Dharug woman commonly known in the Aboriginal community as Mulgo, meaning Black Swan. The daughter of Aunty Edna Watson and Uncle Allan Watson, elders of the Darug community, Leanne was born and raised in Sydney. She is now a mother and grandmother and has spent her life living, promoting and protecting Darug/Dharug culture, people and places.

An artist, educator and award-winning book illustrator, she started painting at a young age, taught by her mother Aunty Edna Watson and her brother Bundeluk Watson. Now an accomplished and highly sought-after artist, her paintings and artwork are renowned by many. Leanne’s artwork is inspired by her family, Darug/Dharug Country, the environment and life experience.

About the artwork - "Casuarinas and Black Cockatoos"

Near the Casuarinas, along the creek, is a safe place. We will find each other there. It is good to see you on Darug/Dharug land... Budyari Naawunya Darug Nurrawa

This artwork shares Darug/Dharug and English words about forests and feeling good in a place. These are superimposed over Casuarina needles and leaf shadows as Black Cockatoos fly overhead. For Darug/Dharug people, trees are recognised as people and maintain a unifying presence in the landscape, holding and sharing information about the places we all live.

The artists live and learn on Darug/Dharug land and hold a deep love and respect for their environment. Their words help them to grow and transform alongside their communities.

This artwork lies in the idea of The Network – represented by the interconnected values and relationships we develop with people, places and the environment – and sub-themes: